"Keeper of the Ancient Order" (Shantic)

The swirling red giant of a moon looms overhead. A silent reminder of history's darker times. 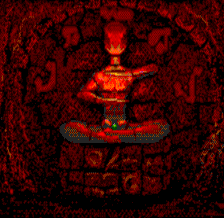 This section contains summaries of all Jorune scenarios played so far by my player group, as well as some campaign related material.

There is no name of the ongoing campaigns which have been played on and off from 1987 until today. Maybe they could be called "Jorune Adventures", or "The Scum of Jorune and What They Do For a Living", or simply ...... "Tales from Jorune".........

Obviously, the first adventures weren't very good and might not always have been true to my view of the world of Jorune, which has grown and evolved in my mind during all these years. Some are even embarrassingly childish, but all the same, part of the ever winding tale.

All adventures still exist in paper form with some maps and sketches. The most recent adventures (Hunt for the Berella and forward) are also available as PDF files – for those interested.

Other adventures:
Played for unknown or obvious reasons with other characters than those from the main campaign.

The Troubles of Humber

(Old, silly adventure and introduction to Jorune. Troubled villagers of the Gloundan town of Humber suffer from attacks from the otherwise friendly scarmis living close by. The tauther heroes were sent out to investigate and found cleash and their human spies attempting to lay their hands on the artefacts of the Humber villagers. After some fighting and unifying of the Humber people, the heroes managed to route the cleash and freed the scarmis from their control.)

When living in New Zealand one year to play rugby, I tried to run a Jorune PBM (Play By Mail). It turned out to be too much work for me and ended after 20 sessions with my surprise homecoming to Sweden. Unfortunately, its also in Swedish.

(Set 100 years in the steam-punkish future of an ever brighter burning world conflict between humans, shanta, ramian and cleash, all wielding revolutionary new technology evolved, merged or strangely reverse engineered from the various races and their ancient legacies. The White Legion muadra heroes were placed in keeper rods after nanite infection during the showdown with the Berella in 3510. They are now awakened and cured by help the shanta unite a fractioning world against an ancient evil which is awakening. But this world is much stranger, darker and dangerous than the one they left behind.)

(Set nearly 350 years in the future and begins with the launch of Jorune's first multi-species interstellar mission. The mission's goal is naturally to venture to Earth - the cradle of humanity - and solve the mystery of it's sudden silence those many thousands of years ago. But all political factions of Jorune do not share the optimism of the expedition members. Returned conflict between the Iron Empire and FSVC looms over the expedition, as well as the hidden agendas of the Ramian Void Hegemony and other factions. This has not even taken into consideration the perils awaiting the expedition lightyears away as the members of the expedition are about to encounter ancient enemies long thought dead.)

A extensive list of benvolent friends and dangerous foes the Original Heroes and the Next Generation Heroes accumulated throughout the campaigns.