"Keeper of the Ancient Order" (Shantic)

The elegant and pristine moon has many ravines and craters crisscrossing its surface. A regal symbol and keeper of ancient mysteries. 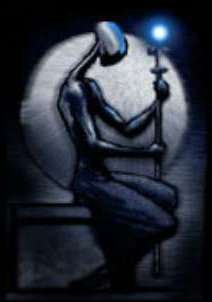 This is a complete list of the essays I have written. Like the maps, these essays have often been created out of neccessity during campaigns, as I have felt the need to get my thoughts on paper.
I'm sure they're full of spelling errors and other mistakes and will of course be in debt forever to the one(s) that make me aware of them.

The rules used by our group allows for more decisions and strategy during combat, but also contain character enhancements (virtues etc) and heroic elements such as Hero Points and Hero Attributes.

These essays detail the invisible and amazing world of isho and its use by various species.

A description of what isho is, how it works, how isho sensitive creatures percieve the world around them etc.

A description of how weaving and other isho manipulative skills works. It also touches vital parts of most muadru cultures.

How the enigmatic shantic technology really works and a list of artefacts. This essay is created for my own revised Jorune game system - Codex Jorunis.

A list of the common dyshas, their effects and how to use them in Codex Jorunis. Also some new dyshas - some unweavable by mere muadru.

The new hybrid technology of the Kerell, which places new nasty isho and muadra inhibiting technology in the hands of purist humans.

These essays add something to the species and cultures, as described in Skyrealms of Jorune

Some additional information about the misty origin of this mysterious and very xenomorph race as well as some of the secrets of Lake Dau-uh-Dey that they try very hard to keep.

Details about the cleash society and its genetic hierarchy, as well as some more arcane and ancient secrets that paint a more sinister and dangerous picture of the cleash.

A comparison of physical attributes, senses, strenghts and weaknesses of the different races of Jorune.

Details about the strict ramian caste system that governs the ramian society.

Some insight into the diverse culture of the amazing salu and their mostly unknown past.

Information about the genetically ordered society of the scatter-brained scarmis.

Information about the dreaded lamorri whose legacies and ghosts still haunt Jorune.

A glimpse into the strictly patriarchal trading families that walk Jorune and govern the lives of all gentle thivin.

Spread of Humanity on Jorune

Short introductions to the history and spread of the numerous human cultures of Jorune, past and present.

Introduction to the mainly unknown and secluded Sky People living hidden amongst the clouds of the towering Thodicean Mountains.

Maps detailing the habitats / realms of the different intelligent species of Jorune.

Humans and Shantas on Jorune

The original text from 3rd EditionSkyrealms of Jorune

Jorune according to sholari James

My personal view of the world of Jorune and an explanation how this version of the world grew into what it is today.

Introduction to the star-gazers, seers, astrologers and iscin that study the night sky and what they know.

Record of the languages of Jorune and their dialects, as well as details of their relation and written scripts.

A list of limilates, their effects, appearance and costs. Some references here to my own revised game system for Jorune.

A list of the usual, but also unusual and unique geographical dangers of the alien world that is Jorune.

Descriptions of the various major faiths, minor religions and smaller cults of Jorune that give an identity and flavour to a people or a civilisation.

The original timeline of the Skyrealms team, with incorporated dates from my essays. This timeline is LONG and should be used in conjunction with my other essays.

A funnier type of equipment list and a must for all tauther.

The Jorune star system with its amazing planets and the history of its human exploration.

Ok, I'm a law student....there just had to be an essay about the different law systems and views on law and order.

Some details about how I coundct the Drenn Test with my players. Make it hard, make it important, make it worth the while.